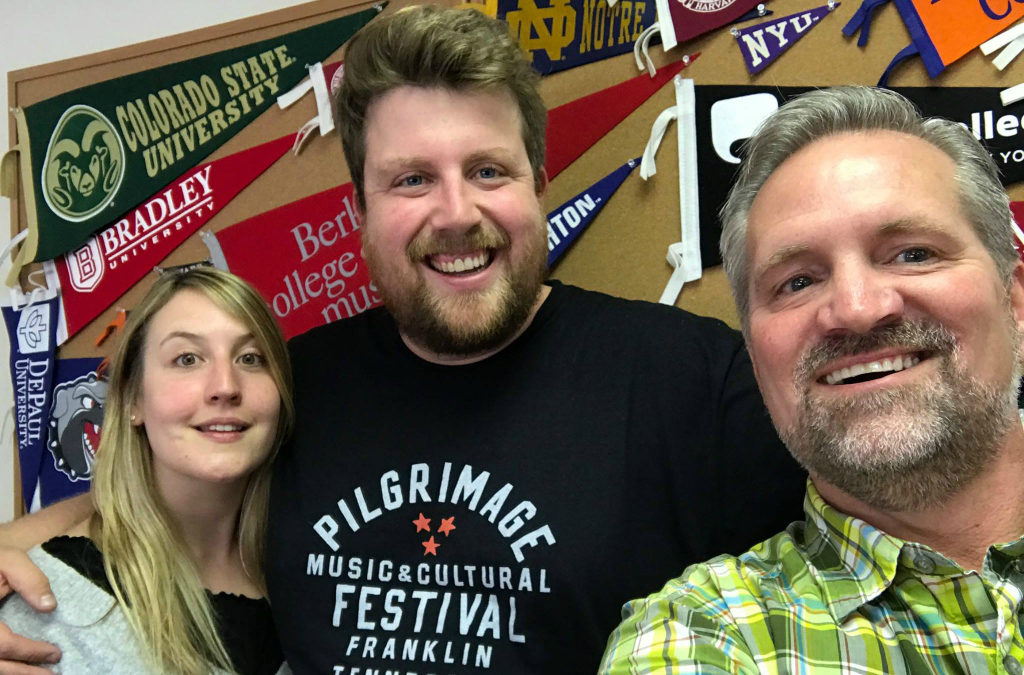 In many ways the European college experience is miles away from college in America. And frankly, we could stand to learn a few things from how they do things across the pond. 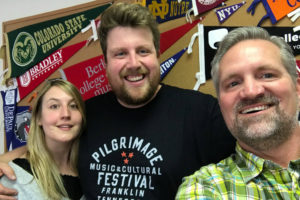 Tom recently had the privilege of visiting with Lucas Fatoussi, a former student from when he was a professor at University of Wisconsin-Richland. This is one of our longer blog posts, but I encourage you to take the time to read it for a refreshing, firsthand perspective on how colleges in Europe differ from what we’re used to here.

Lucas was part of a very unique and special program. Each year, about 25 international students would study at UW-Richland. Like his peers, Lucas had completed high school. He was taking the year to study at an American college before returning home for post-secondary education in Switzerland. Lucas didn’t need the classes he took at UW-Richland for college credit. He took them for the pure love of learning and to experience what American college life was like.

After his year at UW-Richland, Lucas returned to Switzerland to study engineering at EPFL or Ecole Polytechnique Fédérale de Lausanne, an engineering school that’s consistently top-ranked by many of the leading global ranking organizations. Click here for a very cool virtual campus tour.

Tom said, “Lucas always had a genuine thirst for learning. He was there to experience new things and soak up American culture. To him it was worth the time, effort and cost to delay the start of his formal college education in exchange for a broadened perspective and new experiences in another country.”

Tom and Lucas spent time talking about Tom’s college planning business. Lucas marveled at some of the striking contrasts between American views on college versus European perspectives.

I followed up with Lucas to gain additional insights on how college in America compares with his European experience.

One of the most striking areas of contrast was how much where you attend college is tied to your identity here versus in Europe. Lucas noted Tom’s college sweatshirt, (his daily attire), and said that you’d never see that in Switzerland.

Lucas said, “There is certainly pride about your alma mater in Switzerland, but it just cannot compare with how you guys feel about college. When I did my year abroad in Wisconsin, I was absolutely amazed at the intensity around universities, and collegial sport. Even in my small, two-year college at UW-Richland, half the students attended the school’s volleyball game, and everyone was very proud of our colors and mascot (the world-famous Richland Center Roadrunner!).

“We don’t do that here, although it has an enormous appeal. The Wisconsin football game I attended was one of my all-time favorite sports experiences, but it can sometimes feel a bit silly (I mean why would a 300-student university even need a mascot??). For Americans, your alma mater really defines a part of you, doesn’t it? With the exception of Great Britain which I think is similar to the US, we do not identify as much as you do with the institution we attended. For example, I studied in one of the top-50 engineering schools in the world, but I would never, EVER wear a t-shirt with the logo of my school on it. It would be very strange of me to do so (even though I still wear regularly my Badger gear). And in Continental Europe, you won’t find people displaying their alma mater or the college that happens to be in their local community on their Christmas tree or on their cars.

“This has to do with the fact that there are little or no college sports in Europe. I think people are very proud of where they studied, but they wear it as a badge of honor, not as a part of their identity. I am, for example, much more proud of being a physicist than where I studied. The downside of this is that it is less “fun” to attend the universities. But the upside is that people are really focused on what they are studying. I don’t think that going to 6 or 10 football games in an extremely nice atmosphere is enough to make a decision on where to go, I think what you study and the quality of the education should be the reason you choose a college.”

I also asked Lucas about workload comparison in American universities versus what he’s used to in Switzerland.

He said, “It is hard for me to compare, because in the USA, it was more about learning English and making friends. I knew that I could not validate the credit I was taking. But I will say that my first year at university back in Switzerland was hardcore. I had more than 30 hours of classes and had to work almost as much each week on homework outside of class. The university where I studied is investing to allow students to have access to a variety of extra-curricular activities, but also made very clear to us that studying should come first.”

Lucas also commented on the college selection and admissions process in Switzerland, “With a high-school diploma I was able to enter my school without any kind of standardized tests or other exams. I studied science in high school, but I could have entered college in Physics even if I had studied Latin or Spanish. In Switzerland, access to the best university is “easy”, but then the selection and “weeding out” happens during the first year. The educational system is quite different in Switzerland. Not everybody goes to high school. A lot of people take another path early on, an apprenticeship to learn the craft of a particular job. There are also other schools in between. It’s quite complex.

“The first year of university here is usually very difficult, and you can only try two times and then you get kicked out. There is also a rule that says that no matter what you study, if it is at the university level, if you fail three times, you’re out. You cannot enter any other universities. (Again, it is a bit more complex than this, because you have universities, but then you also have other type of “college-level” education, which can be a bit easier to complete). It is not uncommon, for example, to have med students failing (it is by far one of the hardest selections here). They then go to other countries if they want to pursue a med school degree.

“For my degree, the first two years were very challenging, and then, they kind of let you off the hook a bit. You still have to produce work, but the success rate each year is much higher at that point. I remember thinking that my masters degree was much more easily obtained than my bachelor’s degree. I think it has to do with the fact that you get used to work, but also with the fact that it does not bode well for the institution and its international ranking if there are a lot of students failing their master’s degree.”

I asked Lucas about typical living arrangements for college students. He remarked that this is very different as well, “Dorms are not standard over here (at least in Switzerland). There is no ‘campus’ per say. I lived downtown in the city of Lausanne where I studied, in apartments that were not specifically “student apartments”. In a way, it is a bit sad, because I remember how nice it was in the dorms when I studied in Wisconsin. The atmosphere was great, and I’m sure that the campuses of big universities must be extremely fun places. On the other hand, living in the city as a college student, in and amongst people working and doing many other things besides college prevented me from being too disconnected with “reality”. And I still found plenty of student parties to go to, so that really wasn’t an issue!”

Lucas also commented on student-professor relations, “Well while TK (Tom Kleese) was one of the best teachers I had, it mainly has to do with the fact that he was awesome, not particularly because of a different system. I think the relationship can be pretty similar in Europe and in the US. I think the student-prof relation has way more to do with the size of the class. We were 20 per class in Richland Center, but more than 200 where I studied in Lausanne. It is way harder for the teacher to have a real relationship with students in that case. When I was in my master’s degree, classes were smaller, and there was a bit more of a relationship.”

In Switzerland, teaching is a very small part of a professor’s responsibilities. Academic research occupies the vast majority of their time, and they are more likely to get hired based on their academic research than on their pedagogy.” (This sounds similar to large research universities in the US).

A huge difference in European colleges versus American colleges is cost.

Lucas said, “In Switzerland, and in most of the European countries, education is free, or almost free. My family paid 500 swiss francs (roughly $500) per semester. And that was it. We have top-notch universities and it costs us next to nothing, except for the cost of living which can be expensive.

This anecdote will show you how Europeans feel about college costs and the huge divide between American and Europe. I was reading an interview of the president of my university on the subject of tuition increasing in cost. He proposed to pass it from 500 Swiss francs per semester to 2000 for foreigners. This created a huge scandal in student communities here. And after that the media talked quite a bit about this. Everyone was ranting about the fact that school must be free, and that 2000 swiss francs (~$2000) per semester was way too much. The president then explained that they are forced to raise the tuition to be more attractive to (non-European) foreigners. Because when the foreigners see that it only cost 500.- to register in our school, they all think that the school must be of low quality and they therefore go study elsewhere. Isn’t that amazing? I think this connection between being expensive and being a quality school is really sad, and it should not be this way. I’m very proud to be from a country that understands the value of education and invests heavily in it. I know that this “socialist” system is not really how you guys do things, but I deeply think that this subsidized system is a good one. It might cost a lot, and money is sometimes spent on students that prefer to drink beer all day long, but it also allows anyone who really wants to study to get a very good degree without having to pay for it the next 10 or 20 years of their life or trying to get very rare scholarships.”

I found my conversation with Lucas fascinating, and my key takeaway is that the US could benefit from taking a few lessons from European colleges. At a minimum, it’s refreshing to consider the fact that college doesn’t have to be the way we think of it here in America in order to produce amazing, educated, qualified adults who contribute significantly to their communities and the careers within them.